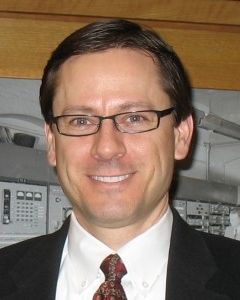 Mark Yeary received the B.S. (honors), M.S. and Ph.D. degrees from the Department of Electrical Engineering, Texas A&M University (TAMU), College Station, in 1992, 1994 and 1999, respectively. Following his graduation in 1999, he continued his digital signal processing and practical instrumentation based research at Texas A&M and worked collaboratively with a variety of companies, including IBM, Raytheon, Cisco, Texas Instruments and Lockheed-Martin. Since fall 2002, he has been with the School of Electrical & Computer Engineering at the University of Oklahoma (OU), Norman, where he is now a full Professor. He was named the endowed Hudson-Torchmark Presidential Professor in 2011. In addition to his role as a faculty member, beginning in the fall of 2013, he was appointed as the inaugural Distinguished Faculty Fellow in OU’s Office of the Vice-President for Research. Yeary was a founding member of OU’s Advanced Radar Research Center’s (ARRC’s) design facility known as the Radar Innovations Laboratory (RIL), and has served as an ARRC rotating Associate Director.

His research, teaching and consulting interests are in the areas of digital signal processing (DSP) as applied to customized DSP systems and instrumentation, primarily in the area of radar, with an emphasis on hardware prototype development and practical measurements. He has written approximately 180 conference papers, conference abstracts and journal papers in these areas. Yeary also has served as a PI or Co-PI on grants from NASA, NSF-ATM, NSF-DUE, NSF-ECCS, DoD-EPSCoR, NOAA-CSTAR, NOAA-NSSL, Raytheon, AFOSR, DARPA, Tinker AFB and CGI Federal. Since arriving to OU in 2002, he has supervised and supported 42 undergraduate and graduate students in the completion of research towards their degrees. In addition, he has provided support for eight post-doctoral researchers and has served on 32 other graduate student committees.

Yeary has spent twelve summers (2002-2014) at Raytheon near Dallas, where he is a Senior Engineer. He has made a variety of technical contributions which include several fielded systems, invention disclosures and proprietary reports. This work includes phased array radar design, tracking algorithm design, SAR/ISAR algorithm design and detection studies. In the fall of 2012 and Spring of 2013, Yeary joined the Massachusetts Institute of Technology’s (MIT’s) Lincoln Laboratory on sabbatical to make technical contributions and anechoic chamber measurements (at nearby Hanscom, AFB) related to one of the preliminary radar panels associated with the national Multifunction Phased Array Radar (MPAR) effort. In addition, a variety of hard-target detection studies were prepared for the MPAR panels.

Yeary is a Senior Member of the IEEE, a licensed Professional Engineer (PE) and member of the Tau Beta Pi and Eta Kappa Nu Honor Societies. Yeary received the 2005 Outstanding Young Engineer Award from the Institute of Electrical and Electronics Engineers (IEEE), as given by the IEEE Instrumentation and Measurement Society. He has served on numerous national and international review panels, and several are noted here. He was a Session Chairman of the 2001 IEEE International Symposium on Intelligent Signal Processing and Communication Systems. In 2001, he served on the steering committee of the U.S. Department on Energy’s 2001 Future Energy Challenge. He has served as a Session Chairman at the 2003 IEEE-IMTC and as a Technical Committee Member of the 2003 and 2004 IEEE-ICIP. He served as a Technical Committee Member for IMTC in 2006, 2007 and 2008; and I2MTC in 2013 and 2014. He served as a technical co-chair for this meeting in May of 2010 in Austin. He is an Associate Editor for the IEEE Transactions on Instrumentation & Measurement and serves on the I&M Society’s Administrative Committee (AdCom). He also participates as this society’s Technical Committee chair for TC-26 Radar Cross Section. He is a member of the IEEE AES Radar Systems Panel (RSP) and chairs the RSP’s Civilian Radar Committee. Yeary was a member of the Technical Program Committee for the 2013 IEEE International Symposium on Phased Array Systems and Technology, Waltham, MA. He is a member of the Technical Program Committee for the 2014 IEEE Radar Conference, Cincinnati, OH.

In tandem with technical contributions, Yeary is interested in training the next generation of students – principally through hands-on experiments and deep theoretical understandings. He has many years of experience as a teaching assistant, lecturer and faculty member. Since January of 1993, he has taught many students in various laboratories and lecture courses, culminating in approximately 20 years of instructional experience. He was awarded as a 1998 NSF/FIE New Faculty Fellow. By invitation, he was selected to participate in the U.S. National Academy of Engineering’s Foundations of Engineering Education Symposium in 2010. While at OU, he has taught Digital Signals & Filters, Digital Radar Systems, Adaptive Digital Signal & Array Processing and Electronics II. I&M AdCom (2017-2020); (2013-2016); Fellows Coordination Committee Chair|| I2MTC Board of Directors (2016-2019)|| VP Publications (2018-2019); Publications Committee Chair (2018-2019)|| VP Conferences (2016)|| Conference Committee Chair (2016)|| VP Publications (2014-2015)|| Publications Committee Chair (2014-2015)|| I&M Magazine Editorial Board (2014, 2015, 2016)